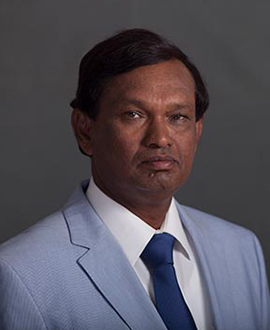 Dr. SM Venkatpathy is a synonym for hard work and determination. He was honest in believing that education makes a human being complete and infuses fairness in an individual’s soul. People saw him always engaged in some constructive assignment and were compelled to learn from him to ‘walk the talk’.

EPGI never saw Dr. SM Venkatpathy initiating any important program without worship to his beloved parents, Sri. Munishamappa and Smt.Gowramma in whose name he built the empire of East Point - The best Indian school in Ajman, In fact it is the wish of his most loving mother Smt.Gowramma that he founded an educational institution and tried to enlighten society. He lived the way his mother wanted him to and proved a model to the young generation who aspire to become education entrepreneurs.

Politics tried to take his attention for some time in late 2000 when he had been the National General Secretary of Congress Party. But he denied such opportunities henceforth and confined to the field of education. With a humble beginning of a small School in Kalyan Nagar in 1997, he could build the present mega structures and created world-class facilities in a scrawling 180 acres of land with nine institutions and around 10,000 students on board. He deserves an admiration for having structured an economic zone in East Bangalore nurturing the aspirations of thousands of people and offering them the best cbse curriculum school in Ajman.

Simplest of the simple yet the noblest Sri. SM Venkatpathi was honoured by the Esteemed Tumkur University for Lifetime achievement as an educationist in 2012. People remember him as a person who lived his life for restoring the value of education.

Being a great visionary Dr. S.M. Venkatpathi, founder chairman was able to fulfil his dreams through the esteemed institution, East Point Indian International School which is crowned as the best Indian school in ajman . UAE.